Hark! The latest news and musings from the GDC Global-Mega-HQ. Here we'll keep you posted on the latest GDC press sightings, what's new with the fleet and staff, specials and other awesome deals we're running, and even the occasional rant/opinion piece about the exotic car industry ;)

You can use the filters to the right to narrow posts by year.

Kudos to Autoweek for the shout-out about our LA launch. From the article: "Few things fit into the Los Angeles social strata more perfectly than the chance to impress neighbors, clients and agents alike behind the wheel of something that's just been driven off a rap-video shoot. What better way is there to tell people -- nay, shout at them from an blimp-attached megaphone, "I am better than you?" Now, Gotham Dream Cars opens up a branch in Los Angeles right off the 405 Freeway, giving Angelenos their much-awaited chance to be better than everyone else -- if only just for a day." 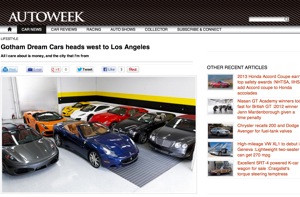 The fine folks from Thrillist joined us for our first Los Angeles Dream Car Tour and had a great time. They gave us some love in Thrillist Los Angeles with a review of their experience. From the article: "Gotham Dream Cars isn't just why Alfred covets Bruce Wayne: it's actually a supercar rental service that also does day-tours wherein you do an oceanside PCH drive and then jam up the Mulholland/ Topanga Canyons driving not one, not two, but six cars you'll never be able to afford. Ever. Even if you're the dude who sold that show where the monkey is a doctor." 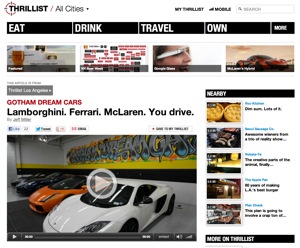 We're exceedingly excited to announce the opening of our first West Coast office. Los Angeles has long been considered one of the best markets for luxury car rental in the country, and folks have been asking us to bring our services to the LA-area for years. Finally, we've done it. We'll start with a few of our best vehicles and expand over the coming months. Full press release below. 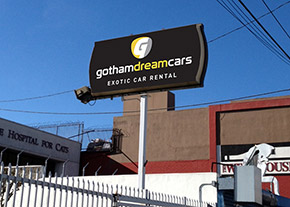